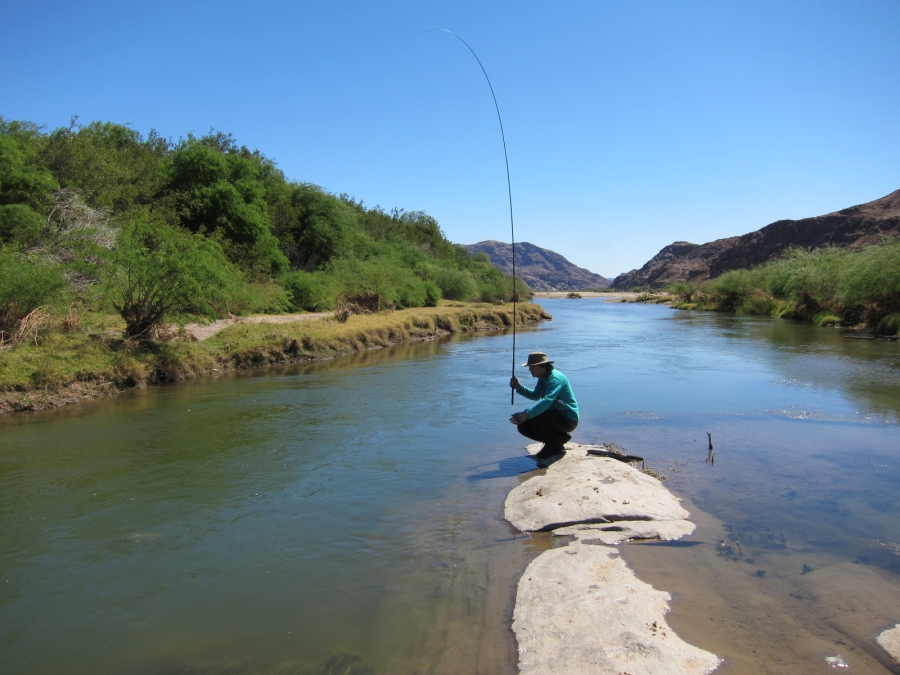 An interim hypothesis on the suitability of tenkara for yellowfish by Ed Herbst.

Two of my friends, both rod builders, Koos Eckard and Stephen Boschoff in Cape Town, have raised and answered an obvious question: Can tenkara rod be used to catch yellowfish?

The perception is that a tenkara rod is too delicate to cast the heavy flies needed and that if you catch the yellowfish of a lifetime you will rue the fact that you were not using the conventional ten foot, 5 weight fly rod and a 100 yards of backing. 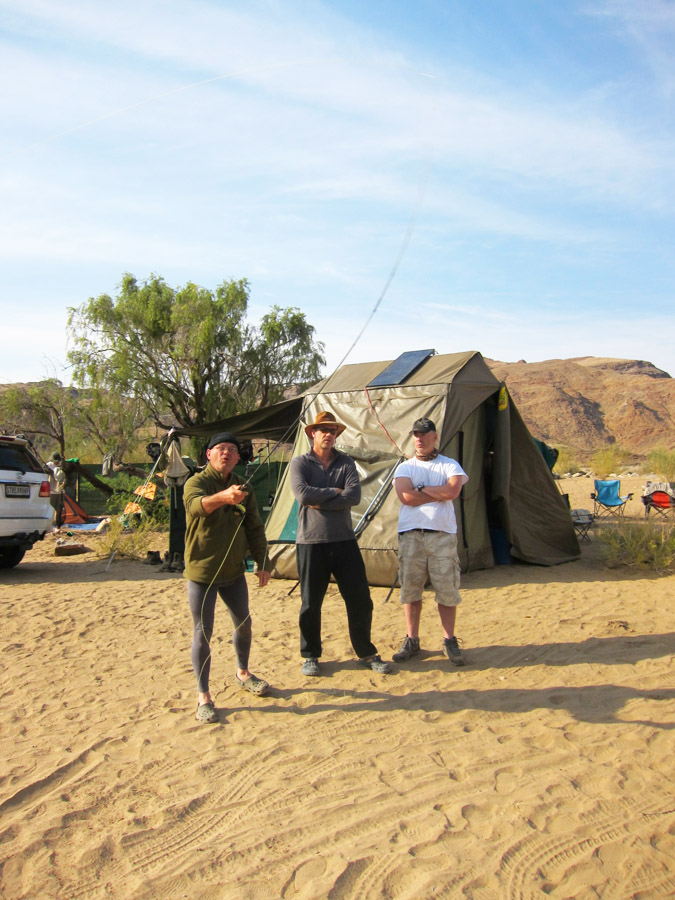 Tim Roston, author of “Learn to Fly cast in a Weekend”, gave the expedition members lessons each morning.

Well, Stephen has just returned from a four-day trip to the Orange River in the Richtersveld, one of several each year organised by Cape Town REFFIS-accredited guide Tim Rolston and Craig Thom of StreamX, and he feels that the method does have an application for yellowfish.

Stephen asked me to tie some flies for the trip and I tied about 60. They ranged from tungsten scud patterns equipped with 4mm tungsten beads and shellbacks utilising Veniard’s tungsten sheet, tungsten bead Brassies in various colours and some fairly sparse soft hackles. 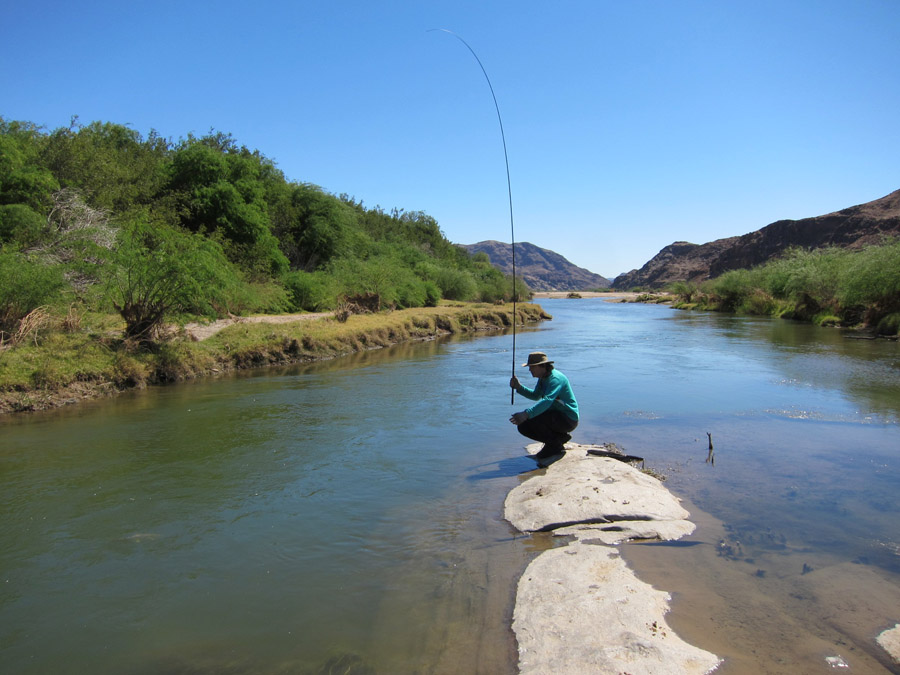 I gave Korrie Broos a few boxes of micropattern hooks from #22 – 32 and in return he added a few dozen of his own yellowfish flies to Stephen’s arsenal.

Stephen had sourced, through Craig Thom, a 14 foot blank which is designed for another application and converted it into a tenkara-type rod.

He took only the tenkara rod and stresses that his experience is not a defining answer but an “interim hypothesis” on the suitability of tenkara for yellowfish.

“I suspected that one can land most river fish on the tenkara rod. It is long, and if held correctly, the fish fights a very long lever. The Japanese move their rods slightly to guide fish.

“My rod is 14 foot; a fairly stout one with a softer tip – a sort of 8:2 in tenkara speak. It is a high quality blank, with a simple lilian (piece of braided backing) and hockey stick grip rubber added to make the butt comfortable to hold. It costs about a seventh of a top-of the range fly rod – and keep in mind that using tenkara means that you obviate the costs of a fly reel and line. The line is shorter than usual, because the tenkara style rod is used for Czech-style nymphing, lobbing a team of fairly heavy flies at short range. So, attached to the lilian at the tip of the rod is a 5-foot top section of a tapered (2x) leader, followed by 2 foot of 12lb yellow Stren (indicator), and then a Czech style leader of 6-7 foot with only two flies, a heavy point fly with a lighter fly on the dropper above it - double and triple hook-ups do not interest me.” 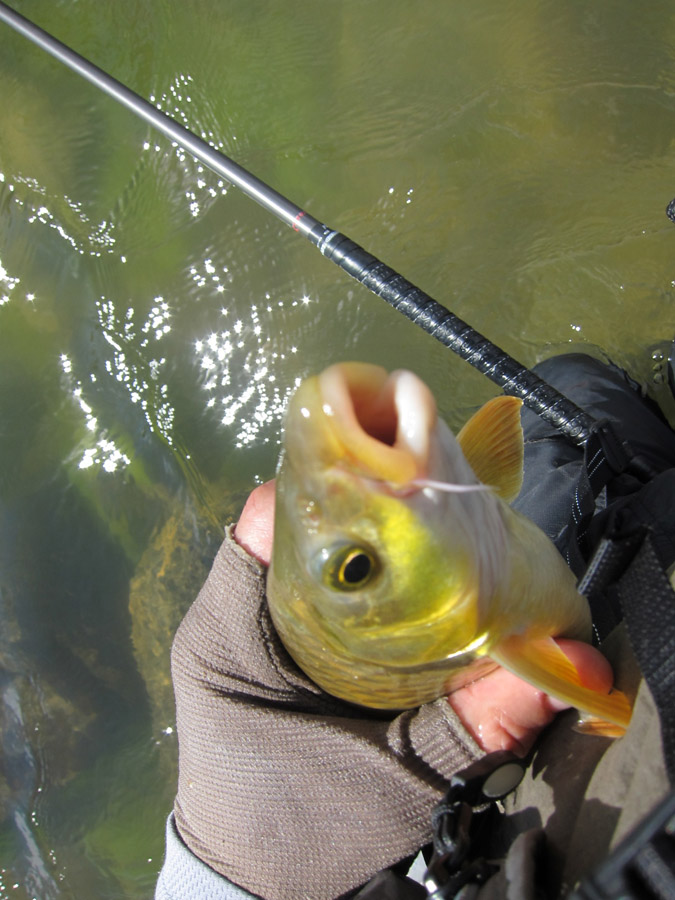 Yellowfish of this size were regularly caught

Stephen says that the length of the rod enabled him to keep the yellow Stren section of the leader vertically above the water which proved outstanding for detecting   takes and he then simply swept the fish to the bank, something enhanced by the length of the rod. He says most of the fish of up to 22 inches were landed and released within a minute or two so as to minimise stress.

He says that had he hooked a double figure largemouth yellow fish which he could not control he would have simply have thrown the rod, which floats, into the water and followed it (for future trips he would add a cork grip to increase its buoyancy even further and added a bright spot to make it more visible).

He said that all the flies that Korrie and I tied caught fish and there was little to choose between them, but added that the Brassies on the dropper, because they are so streamlined, showed less tendency to tangle with the main line. Craig, however, had tied some San Juan worms, colloquially known as “Ed’s Logjam Fly”. This is because it was designed to be slid downstream and under the logjams which harbour huge pisciverous trout on Basie Volsloo’s section of the Sterkspruit River on his farm, Birkhall, in Barkly East. 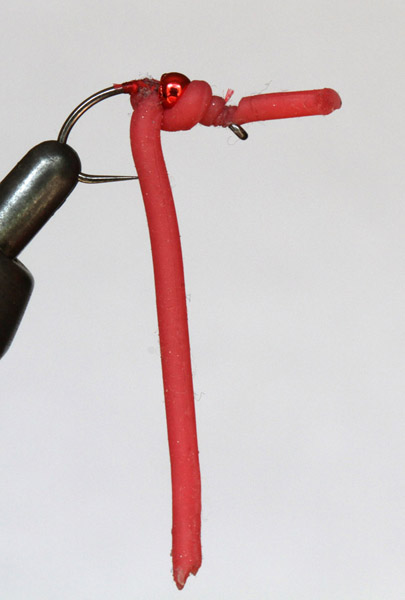 It utilises Squirmy Wormy soft rubber material and the takes to this “fly” were so aggressive that Craig stopped using them because it was sometimes swallowed so deeply that it made releasing the fish difficult.

Stephen thinks that a lighter, more delicate version of this 14 foot tenkara will prove exceptionally effective on local trout streams during the coming year.

Craig stayed on for a few days and, after accepting Steve’s rod with due reverence, promised to do some more field testing. 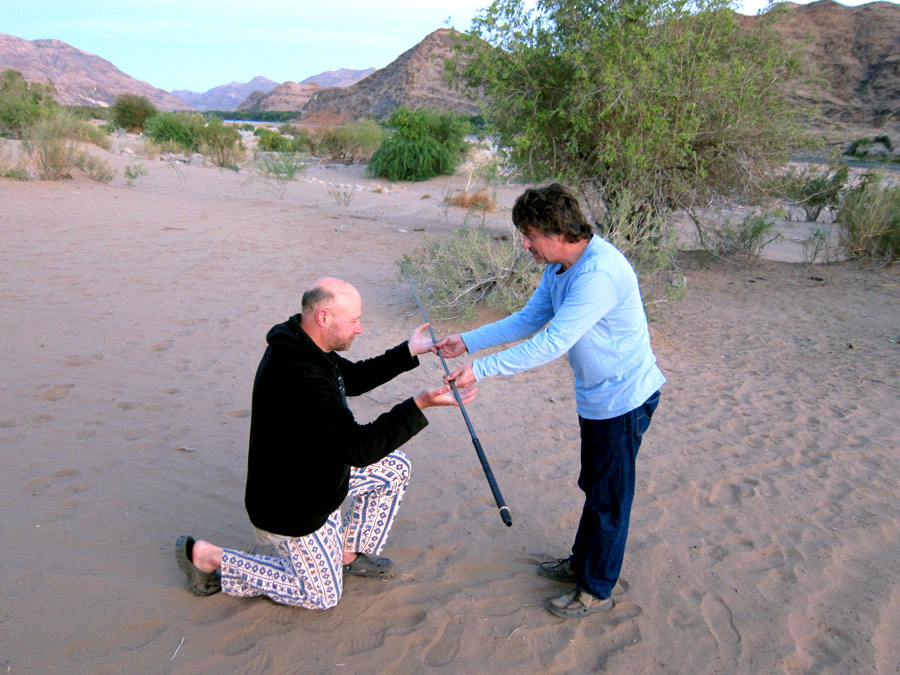 Craig Thom(left) showing the necessary respect as he accepts Stephen’s tenkara rod with the promise of further research and field testing (both tenkari look a bit haggard after four days in the desert).

Tim takes groups of anglers to the Richtersveld in the third week of September each year and should anyone wish to join the group or have tuition in fly casting, he can be contacted through his website. 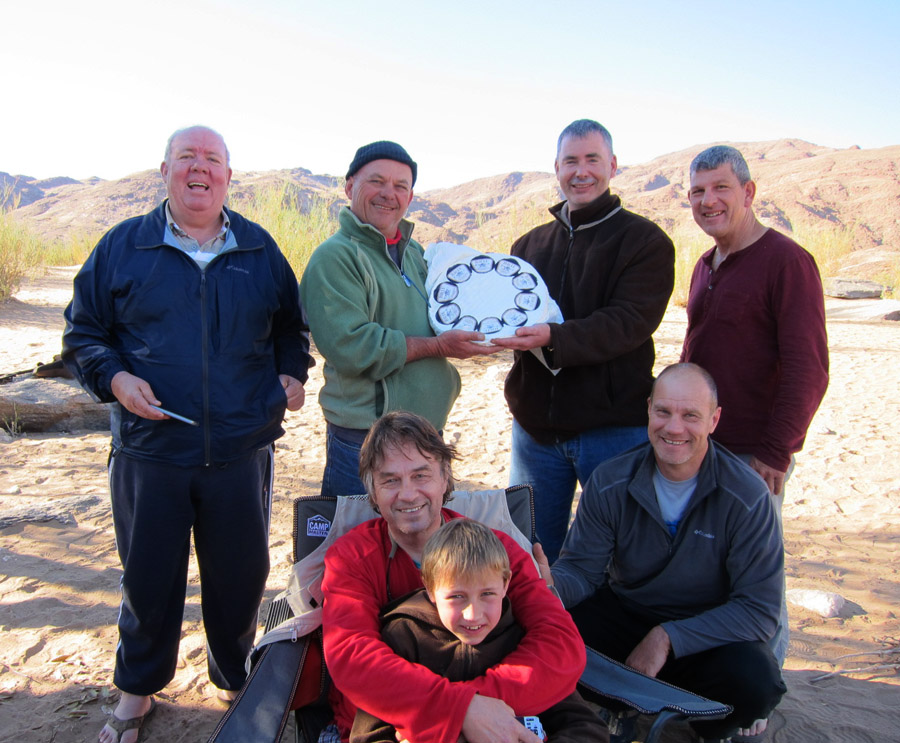