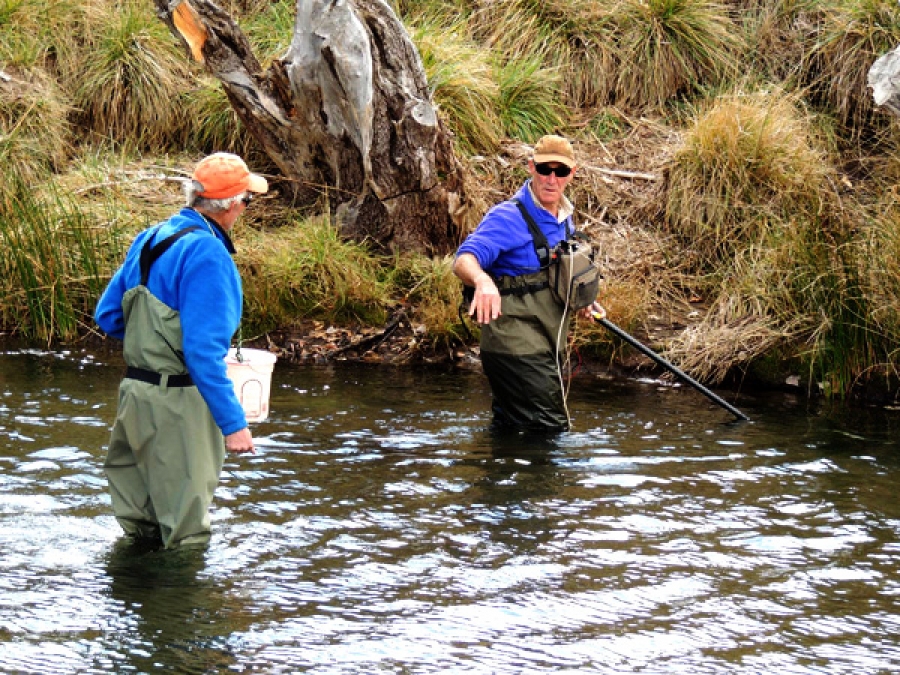 If anything is to be learned from the way in which the Natal Fly Fishers Club (NFFC) work party set about shocking the tiny Yarrow stream, it is that we are not lacking in members who can work with alacrity.

The undertaking, which might be regarded as our boldest to date, set out to transplant trout  from this stream on Landale Train’s farm, Gala,  in the Karkloof Valley near Howick into Club dams to their mutual benefit. It was successful beyond our wildest hopes. In all, 300 trout were moved with negligible loss.

The Yarrow was chosen for two expeditions to cull the excess of yearling trout for introduction to Brewitt’s Dam at Mount West, Nottingham Road and the new Walters Dam at Howick.

Bob Crass, chief scientific officer with the Natal Parks Board and several of his rangers trained NFFC members in electroshock procedures and on 26 June, in a short, afternoon session, 75 fish were translocated to Howick and 25 into the dam of our host on the Gala farm, Landale Train. These fish were captured in less than 500 yards of the stream with no losses after capture.

The following Saturday, a dozen NFFC members put in a day at Gala, resulting in 122 fish being transferred to Mount West, 61 to Howick and 53 to Mr Train’s dam, using the electroshock equipment kindly loaned by the Natal Parks Board. 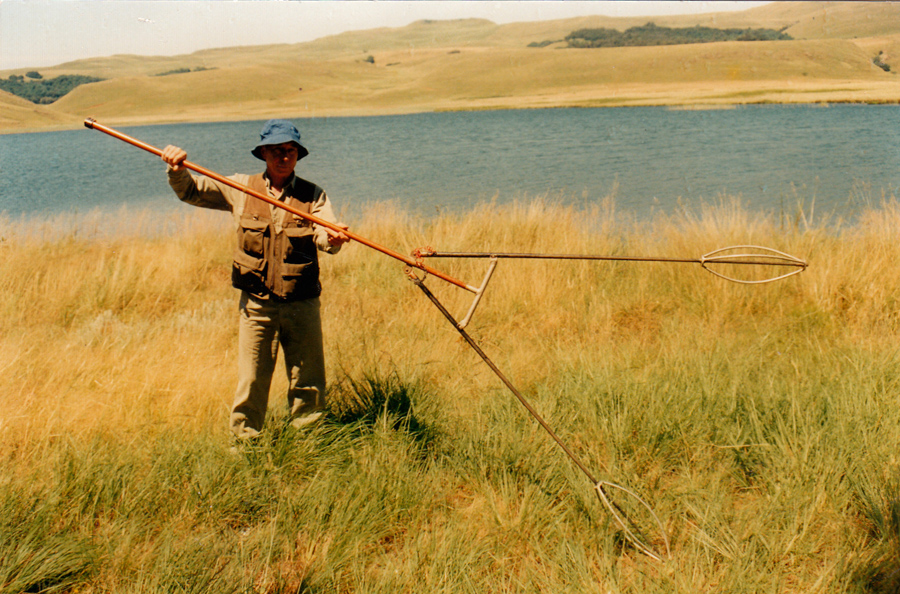 The late Mick Huntley with an early homemade electro shocker

The shocker is simply a hollow fibreglass rod some two metres long, having a Y-shaped fork at the business end. Each arm is approximately a metre long; there are bare electrodes projecting from the tip of each arm with about one metre separating the electrodes. Power is supplied by a portable, engine-driven generator producing 220 volts A.C. which is fed to the hand-held probe by a twin-core rubber cable of about 30 metres.

The probe operator, attired in waders, proceeds slowly upstream, so as not to cloud the water, with the business end of the probe under water. The probe is passed gently into nooks and crannies, under overhanging grass or other obstacles providing possible cover for the fish. Suddenly a shocked fish or two appear as if by magic, white belly up and insensible, at times only partly stunned, or even frisking away downstream.

It is now the turn of one of several net handlers standing behind the probe operator to scoop up any fish within reach. He then passes them to a member standing in the water behind him who transfers the fish to a bucket of water.

With five or so fish in the bucket he, in turn, passes it to helpers on the bank who remain dry-shod but must scamper to the fish storage facility. They are then decanted into drums and transported to the dams being stocked.

A brisk shuttle service is desirable, with the bucket man in the water being constantly supplied with empty pails and being relieved of those containing fish.

The transporting drums, which are carried on a truck, have a capacity of 44 gallons each, but are only two thirds filled to prevent spillage or loss of fish in transit. Ideally, the truck will be able to move slowly with the work party, and someone has the specific job of keeping tally of the catch.

Last but not least it is the duty of two or three helpers to continually tend to the electric cable, keeping it free of obstructions and lessening the drag which would otherwise prove wearisome for the hard-worked probe man.

Occasionally quite large fish are stunned, but all oversize fish are returned to the water downstream to maintain the fishing potential.

So there you are, it’s shockingly simple come to think of it, and a safe bet that, in their new stillwater environment, most of the captured fish will grow from a few ounces to four pounds or so.

In more recent times, Jake Alletson has done some successful electro-shocking in the Rhodes area for Dave Walker

The electro-fishing of rivers is a technique that has been used in South Africa for years.  Essentially it entails the use of an apparatus which creates an electric field between two electrodes in the water. The fish, as well as most other animals within the field, are stunned and can easily be captured in a net.  The process is used both as a research tool and as management device where the fish populations have grown to such an extent that the excess of small fish becomes a negative influence on the quality of fishing

On a recent mountain bike trip in the Rhodes area, Jake Alletson (an aquatic environmental consultant) mentioned this to Dave Walker in that famous pub at Walkerbouts. Dave expressed interest and asked Jake to come and demonstrate how it is done as they may want to use is it when they have too many small fish in their rivers. The Wild Trout Association, with the necessary official authorisation, ordered the electronic box of tricks from an overseas supplier, and asked Jake to obtain the other parts which were available locally. 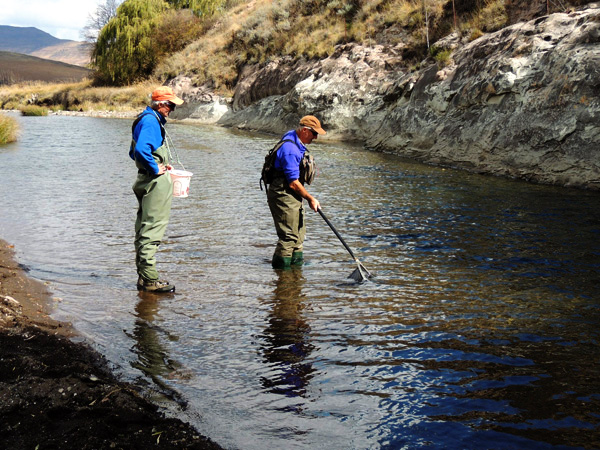 Above and below: Jake Alletson (right) and ‘Leaky Waders’ Kietzman (left) 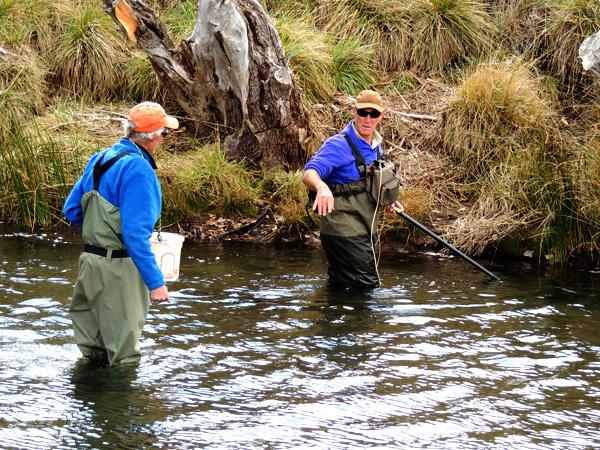 We set out for Rhodes where Jake assembled the equipment and demonstrated it to Dave Walker and Tony Kietzman.  Tony was the one that that got the actual instruction in the river. The equipment generates a powerful electric field and Tony had a quick wakeup call from a tiny leak in his waders through which the water penetrated with the electricity following. Jake commented that he noticed Tony was becoming fidgety then suddenly declared he was leaving the water.  Unperturbed by half the team being off the field, Jake carried on and, as the shock stuns the fish for a very short while, soon had a bucket of small fish. 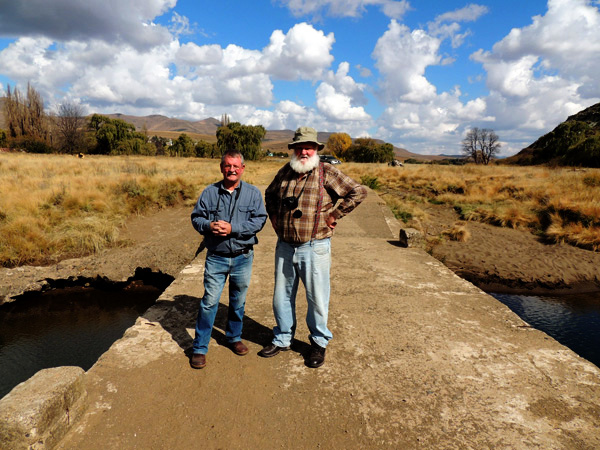 This method of electro fishing can be used in future as over the course of two decades and based on catch returns collected by the WTA over this period, it has become patently obvious that there are certain rivers  that are over-populated with small rainbow trout.

Maxi Holder, Jake’s partner, also used the opportunity to examine the health of the river by means of the SASS technique and she gave very positive feedback on it. (The South African Scoring System (SASS) Bio assessment Method for Rivers. TS)