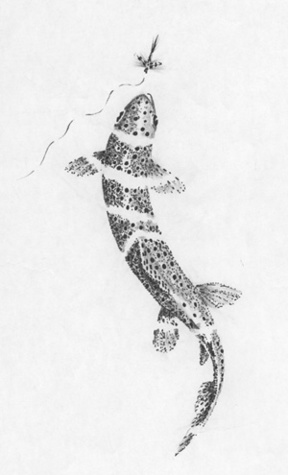 from Ed Herbst with photos by Stephen Boshoff and Andrew Ingram.

A fly fishing trip by four members of the Cape Piscatorial Society to Lakenvlei dam near the small Boland fruit farming town of Ceres, turned into a rescue mission with a happy ending...

When Mark Hughes, Operations Director of the National Sea Rescue Institute (NSRI), the organisation’s Public Education Manager  Andrew Ingram, Stephen Boshoff and I left Cape Town for the two-hour  drive to the 84 hectare dam,  the conversation was about fly choice, where the trout would be found and whether the good weather would continue. Little did we realise that what Mark and Andrew had hoped would be a break from work, would see their rescue skills called into play.

On the morning of the second day a stiff breeze decided me to work on Stephen Boshoff’s local version of a famous American fly pattern, the Double Humpy and the others to fish a bay near the Cape Piscatorial Society cabin rather than paddle against the wind to the inlet stream about a kilometre away. And it was a decision which turned what could have been a potential wilderness tragedy into a heart-warming triumph.

Andrew and Mark, who have sixty eight years of unpaid service as voluntary crew members on NSRI boats – both are coxswains – (skippers) – took to the water, Mark in a canoe and Andrew in a rubber inflatable. Stephen, who normally fishes from a float tube, decided in deference to water temperatures of 8 degrees Celsius to rather fish from the bank. 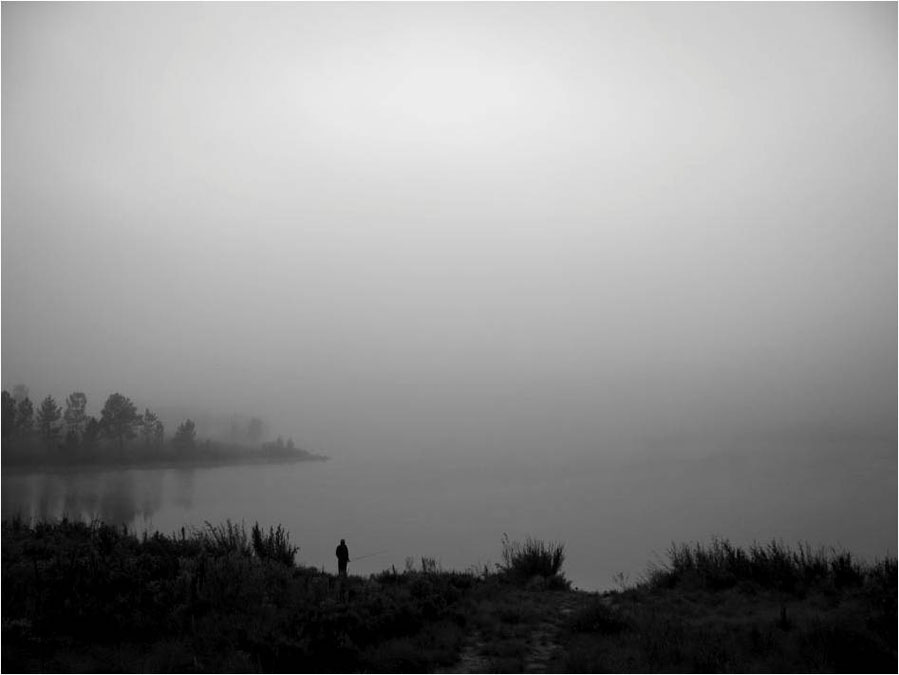 From the bank. Photo by Andrew Ingram

Andrew takes up the story: “I saw something, which I initially thought was a duck, slip into the water about a hundred metres from where Mark and I were fishing. Then I spotted a dog and shouted at it, whereupon it ran away. 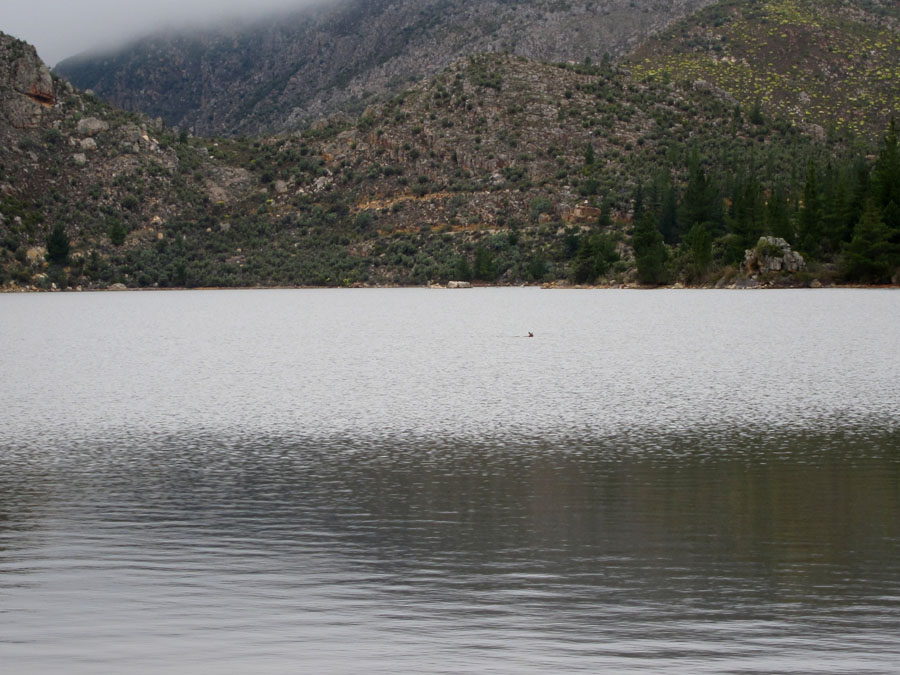 “I drew the attention of the others to something swimming away from the shore and we quickly realised that it was small antelope. 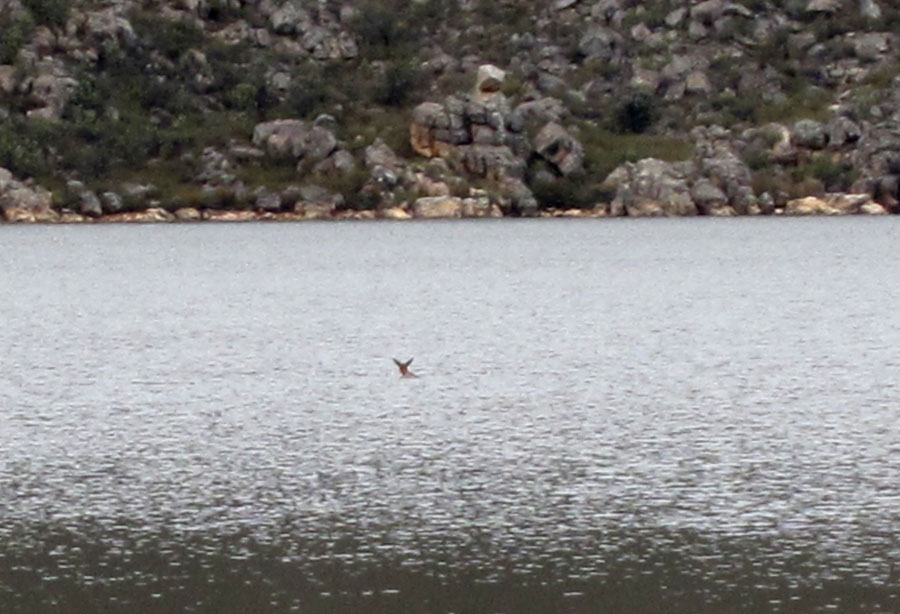 It realised that it would not make the far shore of the dam, more than a kilometre away and turned back towards the shore but the water was really cold and it quickly became apparent that the tiny antelope was not going to make it. 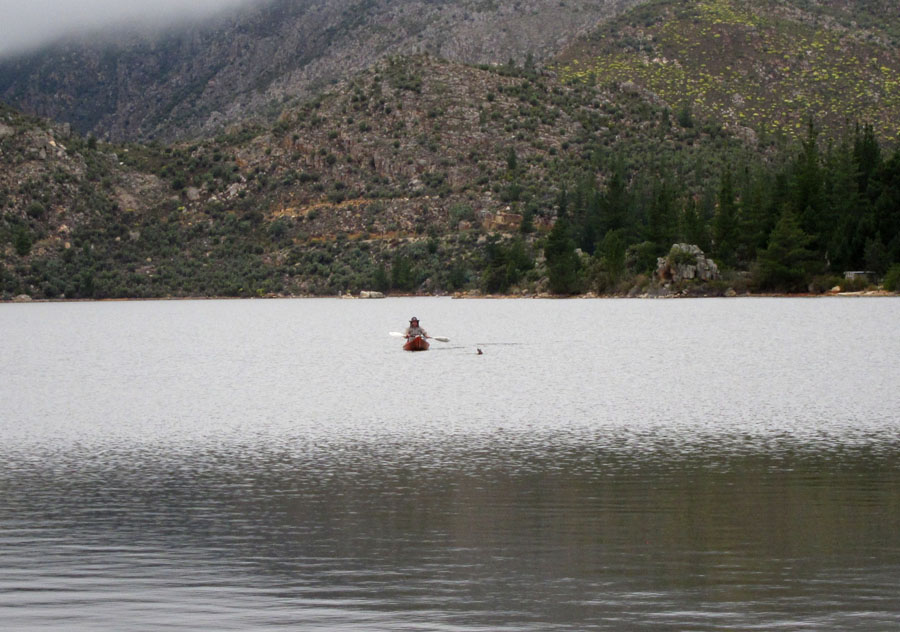 “Mark got to it first and grabbed the back of its neck, holding its head out of the water but this made the canoe very unstable so I took over and he helped me propel the inflatable to shore. 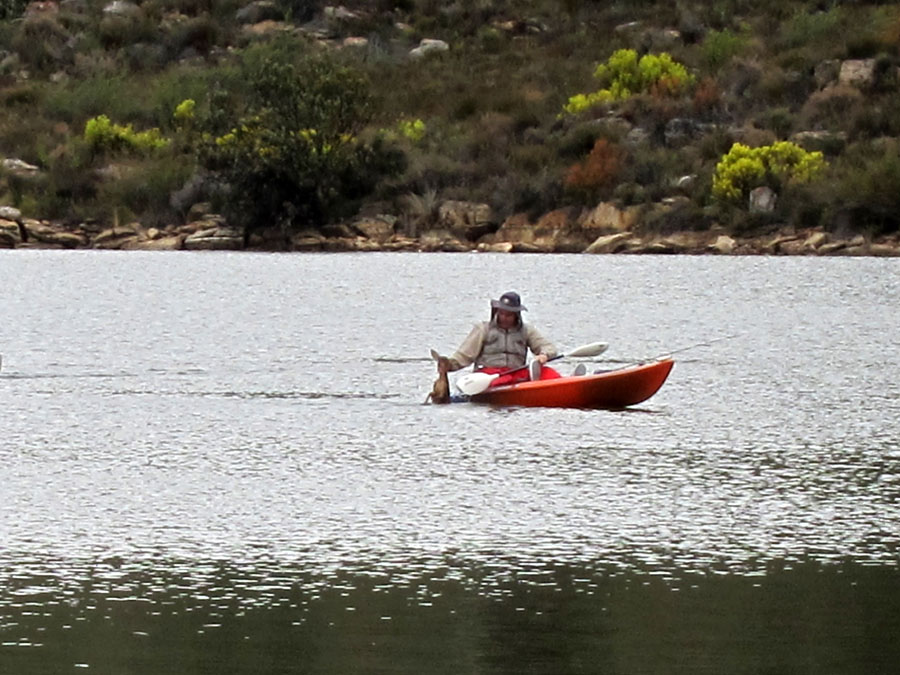 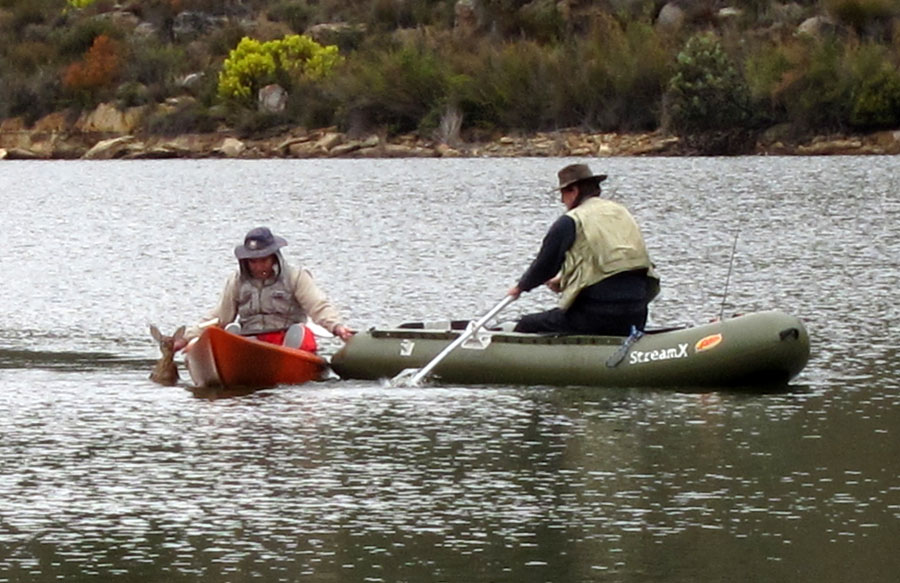 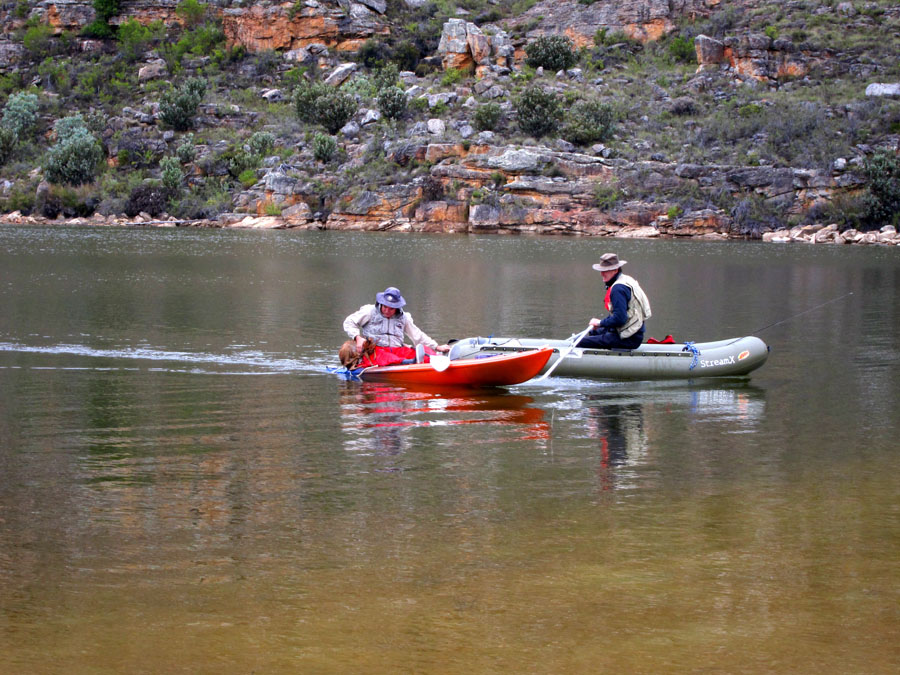 “A metre from the bank the little animal gave a violent kick causing me to lose my grip, but it only ran a metre or two before collapsing, clearly exhausted. It was hypothermic and shivering violently. 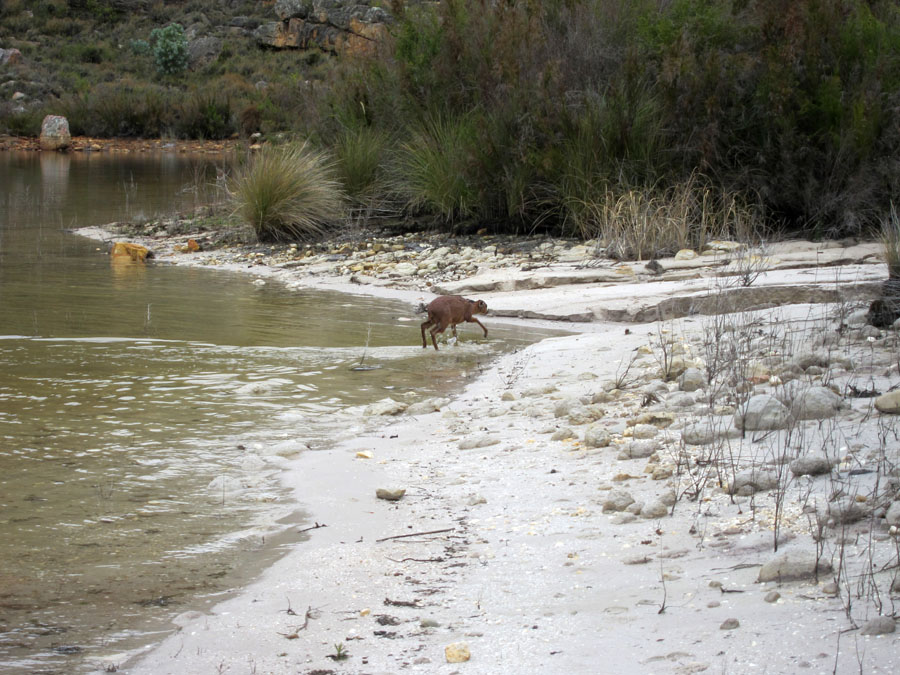 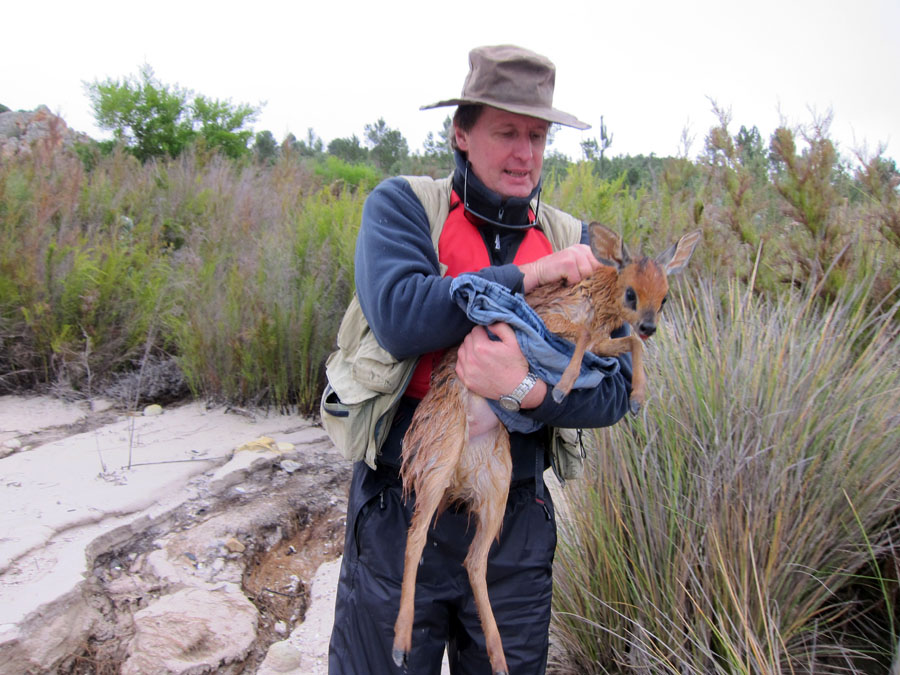 “We dried it with a towel and then wrapped it in a sleeping bag and I lay in a foetal position, hugging it close to me in a time-proven procedure which we use in the NSRI to restore body warmth to hypothermic people who have been rescued from drowning. 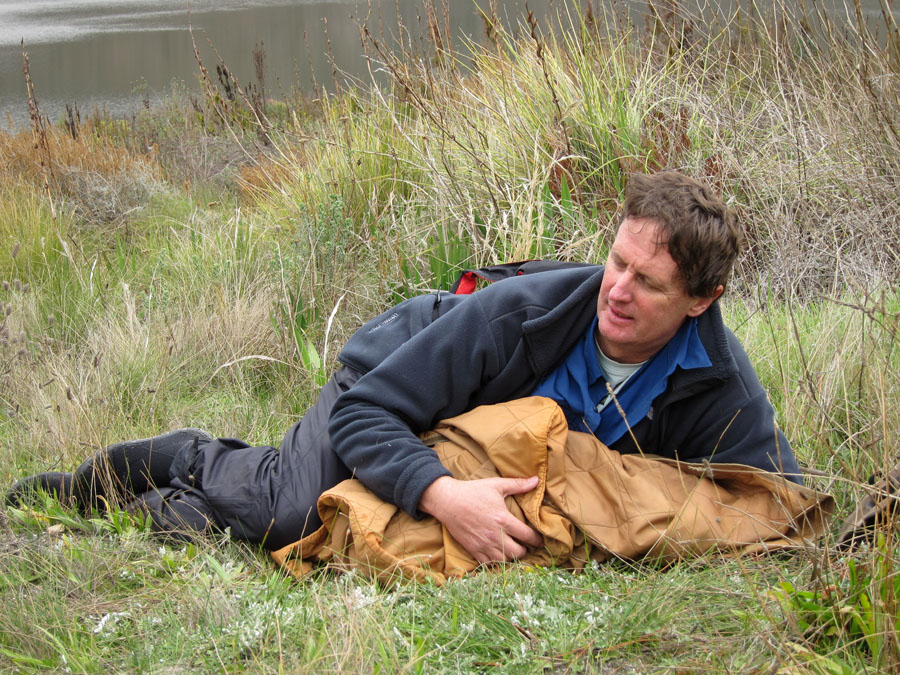 “I kept its eyes covered which reduced its fear and it stopped struggling. After half an hour it stopped shivering from cold and this was replaced with the sort of trembling you feel in an animal when it is taken to the vet – cold had been replaced by anxiety.

“When I let it go it bounded away, seemingly none the worse for its experience. We later identified it as a Cape Grysbok ewe.” 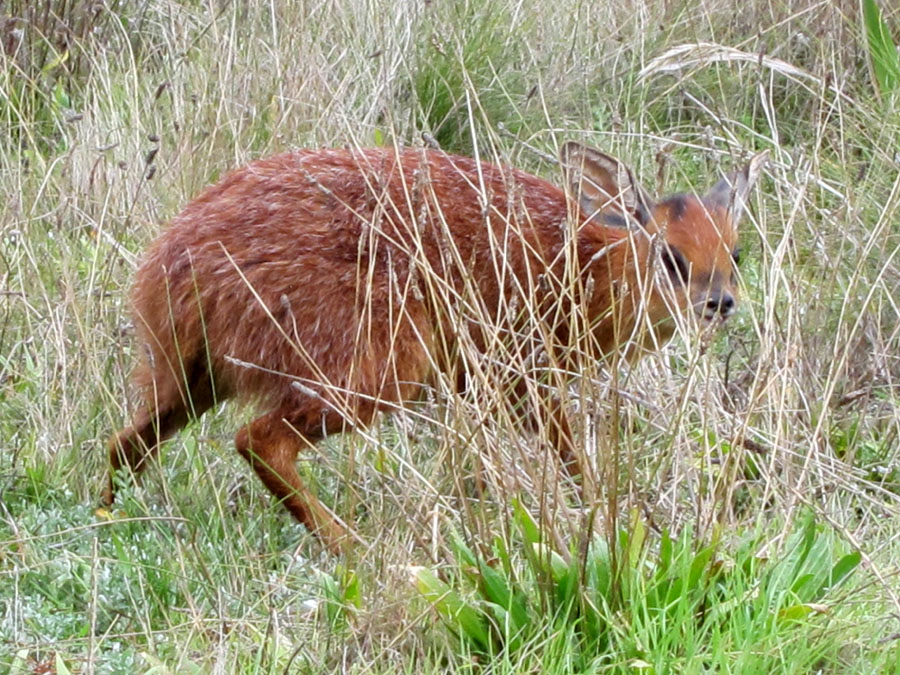 That afternoon, in the waning light, Stephen was back on the water in his float tube, fishing the “Double DDD”, the fly I had tied earlier in the day. His concept, inspired by the Double Humpy which had its origins in the American west in 1981, this pattern saw the biggest trout of the trip landed, a well-muscled fish of more than a kilogram. 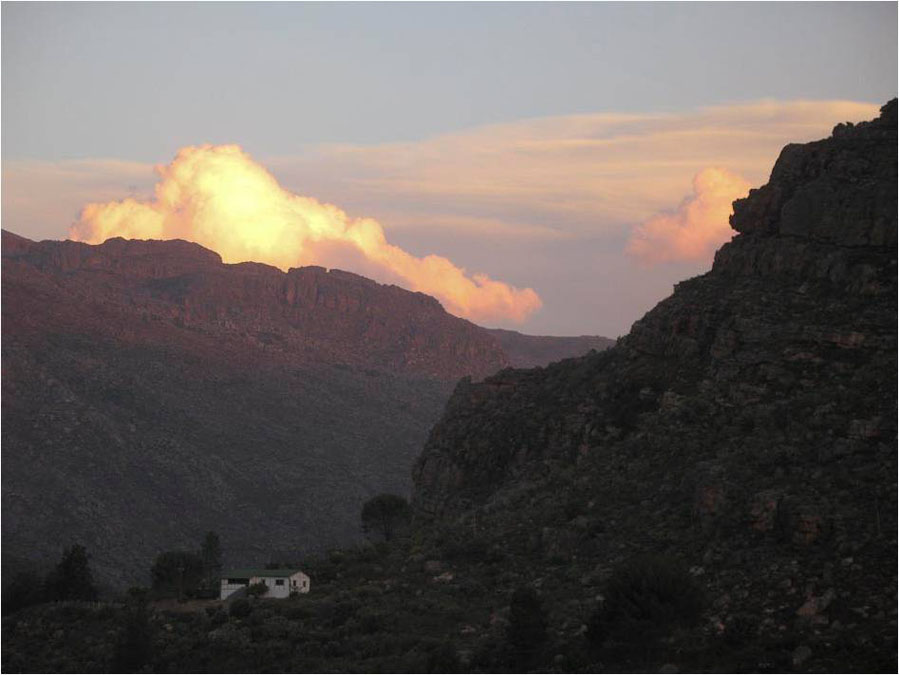 All in all it had been a day to remember and his sequence of pictures preserved that memory. 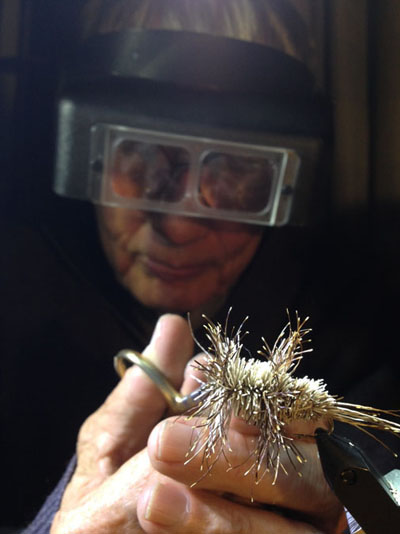