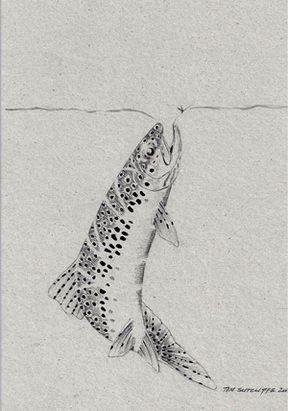 The Closed Season for trout in New South Wales is bit of a paradox. Running from the first weekend in June until the first weekend in October, the intent is to give both Browns and Rainbows the chance to spawn. The irony is that with many browns running early, and rainbows late, that the last and first weeks of the season are among the most crowded of the year, with spawning fish being targeted. Still, the season dates are probably a reasonable compromise given the mixed brown/rainbow fishery. I tend to agree with an old timer that said to me, "I don't like my love life being interrupted, so I give the fish the same courtesy"! Maybe he only gets one chance a year too? 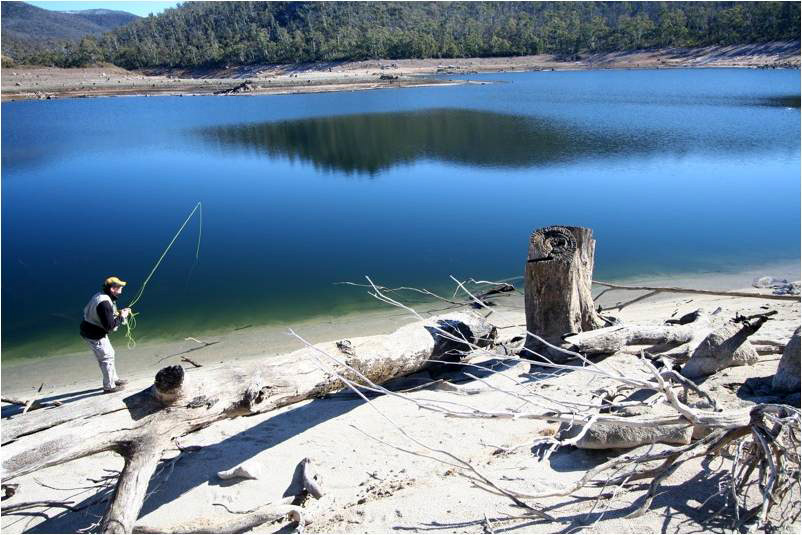 Winter for me is the time to work hard in the shed on rod orders, so I can head out in October with a clear conscience. I would probably go out anyway, but on balance a clear conscience is a good thing. There are other nice things about a closed season - the anticipation of the first day out, sort out tackle, and a chance to reflect and be thankful for the fishery that we have. All part of the rhythm of life I guess.

Ok, having said all that, cabin fever can kick in after a couple of hard months in a freezing workshop, and the Snowy Hydro lakes are open all year. So when Danny Spelic rang and asked if I'd like to join him for a day chasing browns on Lake Jindabyne recently, I cracked and dug the gear out of the cupboard!

While there are several Snowy Hydro Lakes that fish well throughout the winter, polaroiding for edge cruising fish revolves around Lake Jindabyne. There are a few reasons for this. The lake is accessible, and the geography, with a mixture of granite boulders, sand and weedbeds make for attracting fish to the edges and seeing them as well. 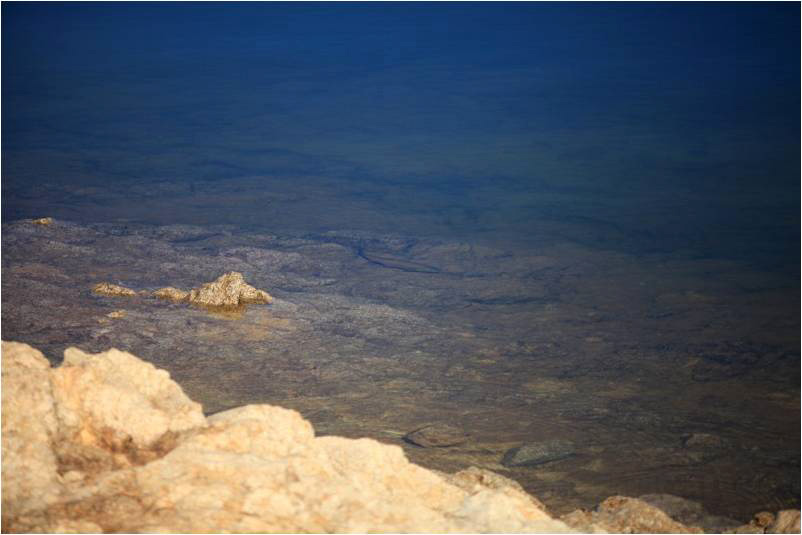 A trout cruising the edge

I do make the odd trip or two to "Jindy" each winter, with varied success, but Danny is mad keen on it, so it was an opportunity for me to learn a few hints as well.

There are a number of critical factors a successful winter trip to Jindy. First and foremost, fish are an essential ingredient! The Thredbo is the main spawning river for the lake, so you need to wait long enough for the fish to have run, spawned, and then returned to the lake to regain condition. It's possible to make a trip too early, on a seemingly perfect day, and not see a single fish. Believe me, I know. A week or two later, and the same conditions might result in chances at twenty or more fish. Generally, sometime in July things start to come on, and continue right through into September. Another major consideration is weather. Because of the lakebed, and moderately steep sloping banks, sunny, cloudless skies and calm weather are very important. This is in contrast to polaroiding shallow Tasmanian lakes, where wind "opens up" the viewing window through the waves. What is needed for Jindabyne is a big, fat high pressure system centered right over the region.

Thankfully the day we had chosen met these criteria, and rounding the bend on the road, a near glass like surface of the lake was revealed. I am a landlubber by nature, and don't own a boat, but Danny and his mate Tom had bought one for our trip. Not to fish from as such, but to ferry around to different banks, keeping the sun behind, and to access the lake's island shores if required. The boat's usefulness was demonstrated early on, when the first few sections of shoreline didn't result in a single fish being sighted. 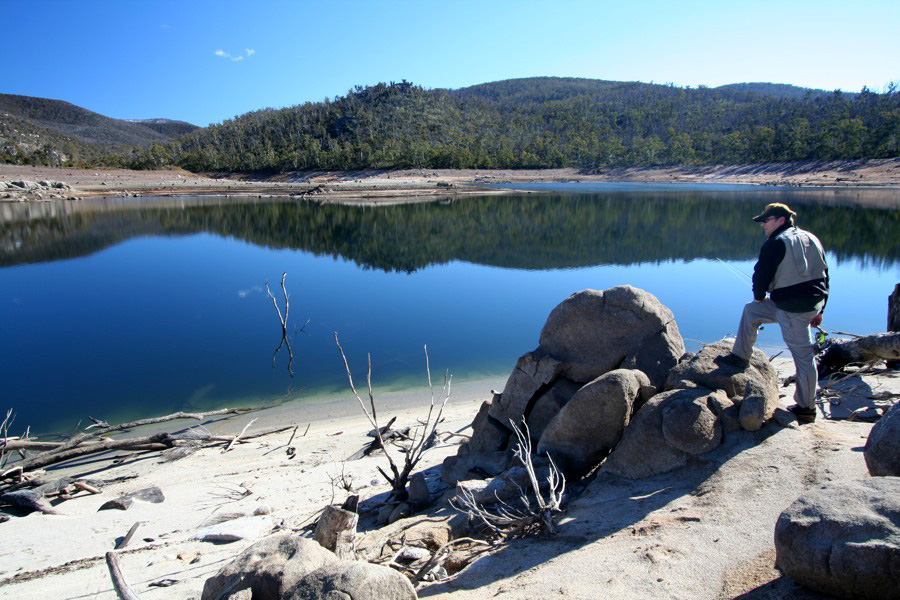 While looking for fish, a high vantage point is crucial for maximising visibility

Moving to another bank, we started seeing the odd fish. The general procedure is to walk slowly, high enough up the bank to see both out from the bank and up head along the edge as well.

When a fish is spotted, one angler sneaks down to cast to it, while the other stays up as spotter. Dead calm conditions are great for seeing fish, but can lead to them being super spooky from the line, or even the leader or fly landing. This was the case for the first couple of fish we tried for. To add to the difficulty, quite a few were lying doggo, absolutely motionless, making it next to impossible to get a fly close enough for them to come at it but not too close to spook them. Opinion is divided as to whether these fish are actually still, waiting to ambush prey, or just relaxing in the sun after all that "hard work" up the rivers. 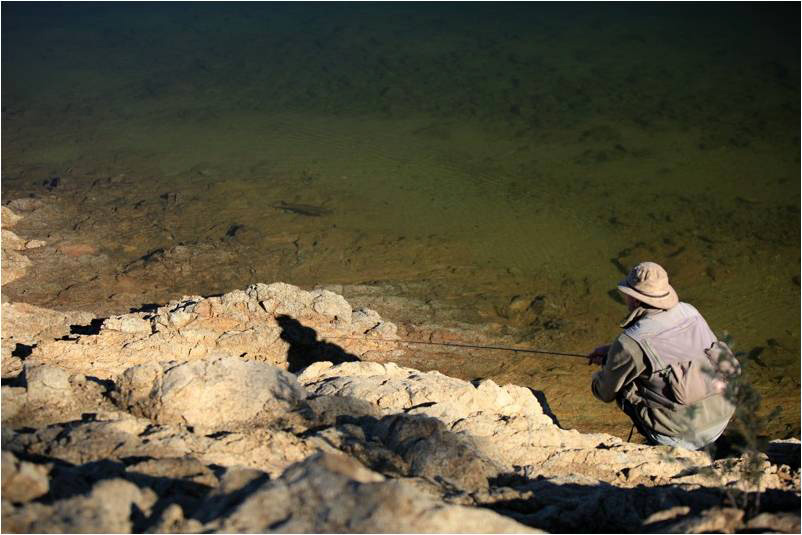 One angler sneaks down to cast, the other stays up as spotter

Flies seem to be a matter of personal preference. These fish feed from everything from tiny sand caddis and snails to big yabbies (koura). In calm conditions smaller flies on long leaders are certainly easier to present, and I've done as well as with a #16 black and peacock spider as anything else. This was the fly I had on when my turn came on a typical fish of two or three pounds, hovering motionless along some dead timber. After my first cast fell too short, my second had the fish slowly swimming up and gently sipping the fly in. 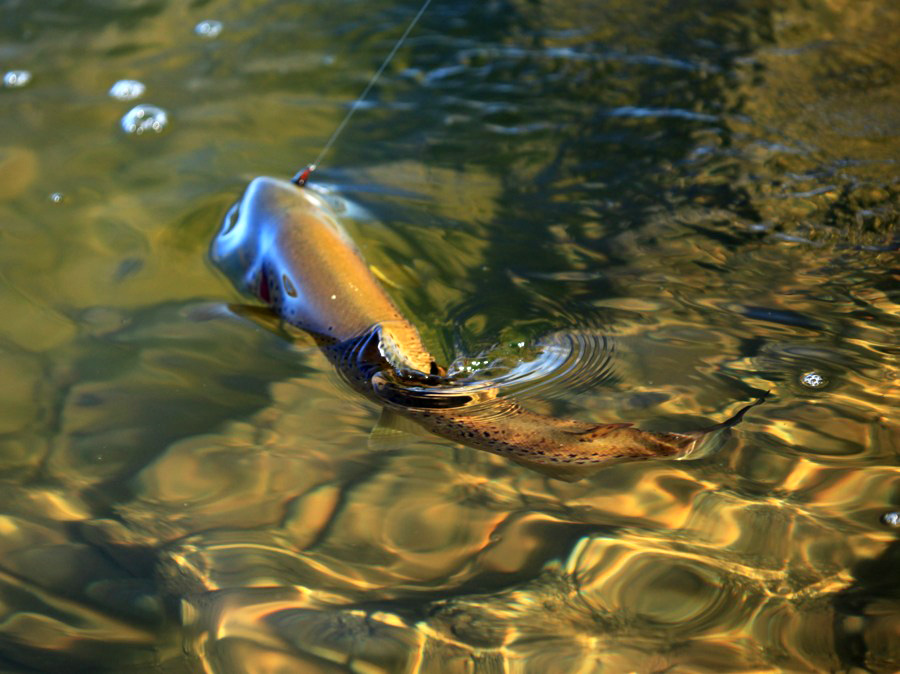 I struck, the fish took the line around the timber, straight out into the lake, jumping and popping the tippet. Game over! Maybe it's a symptom of how soon the fish have returned from spawning, but there is a lot of variation in how they fight. Most just give a bit of a flop around and come in without too much drama, while the occasional one goes off like a rocket. 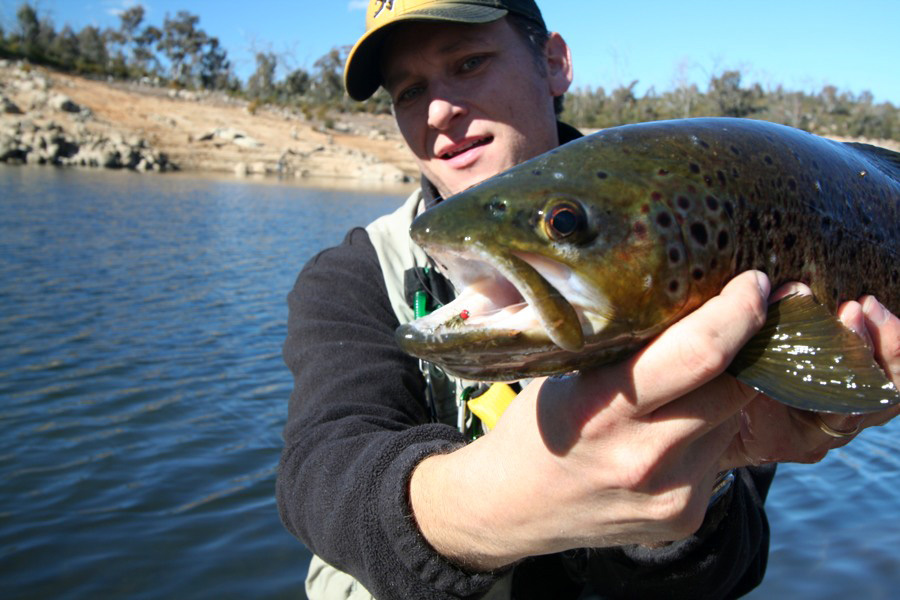 Danny's chance was next, and he showed me how it was done, landing a nice brown around three pounds. Tom had gone in another direction, and we met back at the boat for some lunch. Tom had seen a few fish in a bay further up in the Snowy arm of the lake, and as we were discussing this, he spotted one motionless right in front of us. A gentle breeze had started to spring up, putting a riffle on the water that, along with glare from some high cloud passing over, was reducing the visibility. Tom put the fly out about fifteen feet upwind of the fish, letting it drift back towards it. About half way there, the fish lit up, moved over and sucked the fly in. Like Danny (and unlike me) he brought the fish, a good match for Danny’s, to hand without any problems. With the wind slowly gaining strength, we persevered, seeing a couple more before winding up around three in the afternoon to make the two hour drive back to Canberra.

As I write this (at the end of August), an email from Danny has come in saying that the lake is still fishing really well. A friend has caught a fish over ten pounds, and Danny has managed several around the six pound mark. As is usual around this time, schools of pre spawn rainbows have started congregating around some of the rocky shores as well. 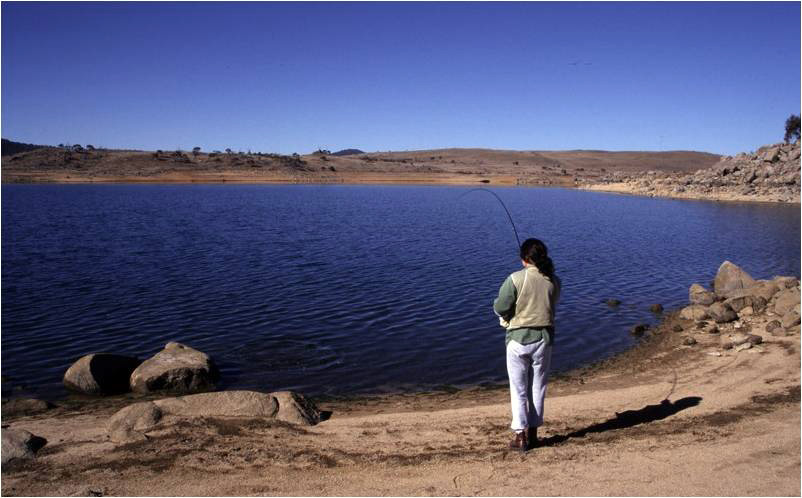 In typical form, my wife Miri outfishes me yet again...

I think I will always be a dry fly stream man at heart, but given the visual nature of winter polaroiding, and large fish as well, there are plenty of worse things to do on a sunny winter’s day. Speaking of which, the frost is melting off the pergola, so it's back to the shed for me, unless that's Danny ringing on the phone... 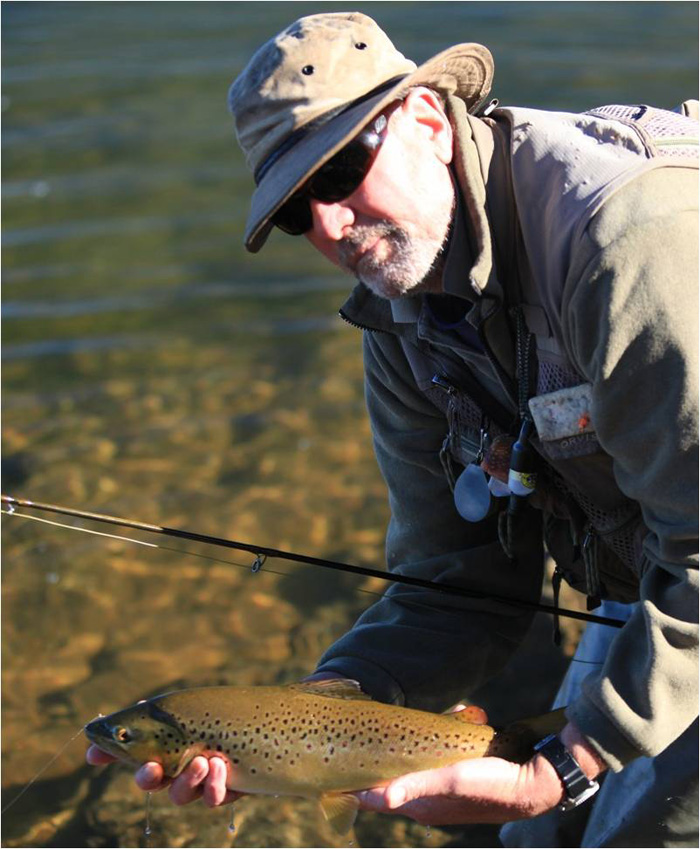 A friend Paul Bourne with a lovely Jindy brown

(Nick is a master bamboo rod maker. See his website on http://www.taranskybamboo.com.au/ and more of his work onhttp://www.codella.com/bamboo/nick_taransky.htm. Tom Sutcliffe )